Annual sponsorship benefits apply. Please contact Logan Beszterda to use your tickets or to purchase a table.
Register
View Event Attendees
In 2014, the Houston economy suffered a two-year precipitous decline following a crash in oil prices. While the Houston economy has largely recovered since then, the office real estate market has been left with 51million square feet of available space, which equates to a 22% vacancy rate.

While the Houston economy is expected to add 42,000 jobs this year primarily across health care, food services and construction, the oil and gas industry continues to contract, expecting to lose 4,000 jobs. The office market is still
tied to the success of the oil and gas industry, which comprises 30% of office inventory, forcing office real estate landlords to exercise creativity in attracting tenants, who, in an over-supplied market, have more leverage in lease negotiations.
What will it take for Houston’s office market to stabilize? Find out from our panel of experts, who will seek to provide solutions.
MODERATOR

Stephanie Burritt, NCIDQ, RID
Principal, Co-Managing Director Houston
Gensler
Stephanie Burritt is a Principal and Co-Managing Director for Gensler’s Houston office. Stephanie's career with Gensler began in 1989, when she joined the firm’s London office. She transferred to the Houston office six years later, where she has had the opportunity to manage workplace projects ranging from one thousand to one million square feet in size. During her time in Houston, she has primarily focused on designing for energy and professional service firm clients, many of whom are long-term and global relationships.
Stephanie has been a member and advocate of The Texas Association for Interior Design for more than 10 years, first as a regional board member for the Gulf Coast Region, followed by Vice President, President and currently  serving as VP of Students and Education. She also supports the Boy Scouts of America at a local and national level, formerly serving as a Venture Crew Advisor for Troop 641. Over the past two years, Stephanie has been recognized as a recipient for both BisNow Houston’s Power Women Award and Houston Business Journal’s Women Who Mean Business Award.

Edward Griffin
CEO
Griffin Partners
Edward Griffin has served CEO of Griffin Partners Inc., an industry leading, family-owned commercial real estate investment, development, and property management firm headquartered in Houston, Texas, since 2002. He has extensive skills in debt and equity financing, valuation, mergers and acquisitions, and corporate finance in both real estate and industry. Mr. Griffin has significant experience negotiating and executing large, complex transactions and has conducted business in Europe, Africa, Asia and Latin America.
Under his leadership, Griffin Partners has grown its assets under management to an average of $750 million over the past several years. The company focuses on value-add acquisitions and development of office, industrial and mixed-use properties in ten target markets in the South and Southwestern United States. Founded in 1980, Griffin Partners has provided investment management services for 14 million square feet of real estate valued at over $2 billion. During his tenure, the company has made 40 investments with no losses, demonstrating the firm’s emphasis on preservation of capital.
Chairman of the firm’s Investment Committee, Edward takes a lead role in development activities of the business. Prior to joining Griffin Partners, his career was primarily focused on commercial and investment banking, including five years in financial advisory services and culminating as Manager of the Houston Corporate Finance Group and six years as vice president and commercial lending officer with the former First City National Bank of Houston.
A graduate of Washington & Lee University in Virginia, Edward holds a B.A. in Economics. He has served on the Board of Directors and Executive Committee of Urban Harvest, was the 2014 President of the Board of the Houston Chapter of NAIOP, a Commercial Real Estate Development Association, and is also on the Board of Houston’s Alley Theatre. 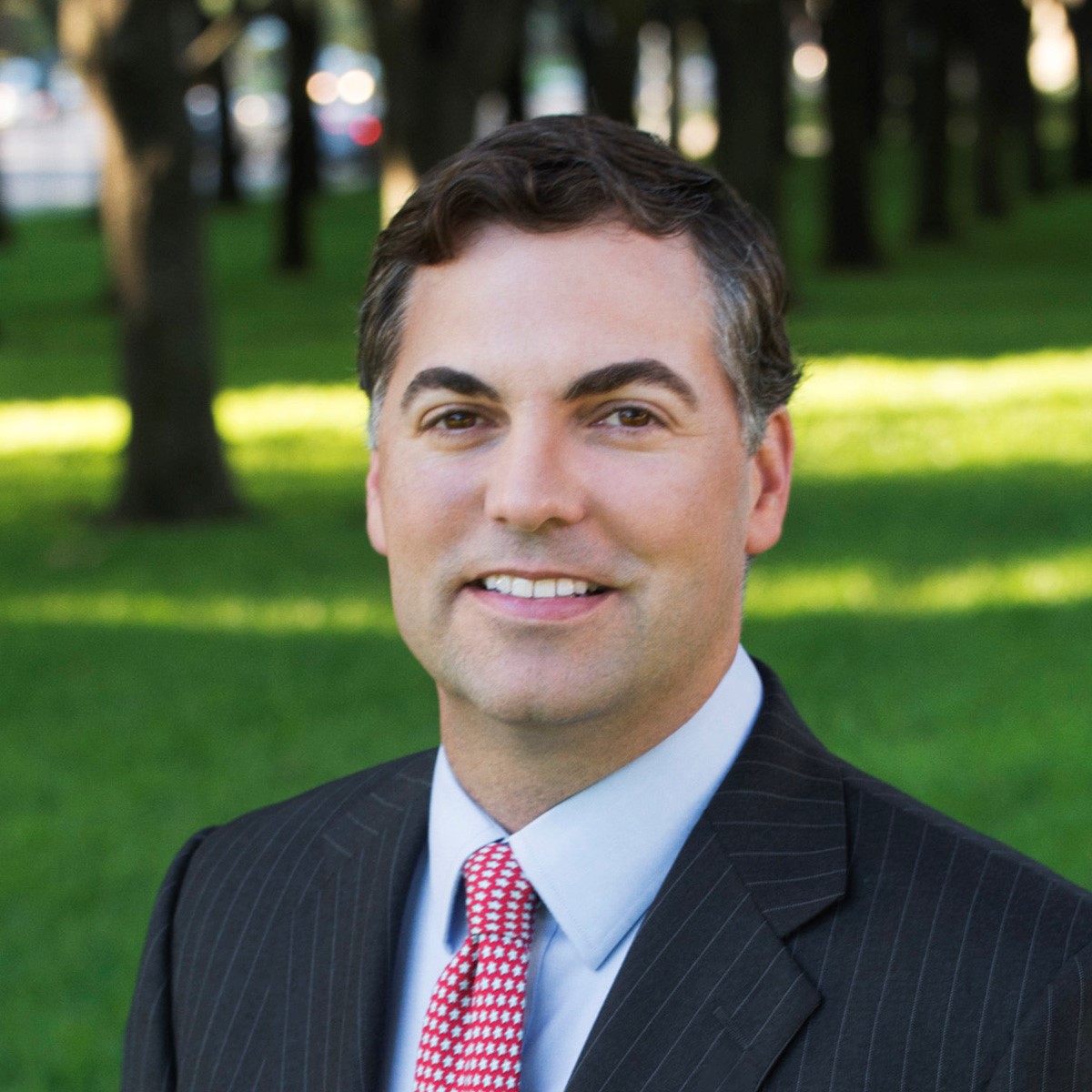 Travis Overall
Executive Vice President, Texas Region | U.S. Office Division
Brookfield Properties
Travis Overall currently serves as Executive Vice President for Brookfield Properties, responsible for holdings in Texas and Tennessee, including over 12.3 million square feet of office space and a 350 room hotel. He has oversight for all aspects of the region’s activities, including leasing, operations, property management, legal, accounting, development and construction.
Prior to joining Brookfield in 2017, Mr. Overall spent 19 years with Hines where he was responsible for the acquisition, disposition, development and management of Class A commercial real estate valued at over $2 billion. Notable projects include: Amegy Tower (Houston, TX), San Felipe Place (Houston, TX), Toyota Center (Houston, TX), 24th & Camelback Phase II (Phoenix, AZ) and the Sheraton Georgetown Hotel (Austin, TX).Mr. Overall has extensive experience in underwriting markets and projects, development, financing, leasing and asset management. While based in Houston, he has worked throughout the southwest region of the United States in Arizona, New Mexico, Colorado and Texas.
Mr. Overall received his BBA from the University of Texas and his MBA from the University of Houston. He is a respected leader in the commercial real estate industry and is a licensed real estate salesperson in Texas. Mr. Overall is a past President of the local NAIOP chapter and currently serves on the boards of Boys & Girls Country, Central Houston and the University of Houston School of Architecture Advisory Council. He has previously served on the Children’s Fund, Houston Arboretum & Nature Center’s board and the Houston Downtown Management District board.

Chrissy Wilson
Executive Vice President, Agency Leasing
JLL
Chrissy is a commercial real estate veteran and expert with 39 years of experience representing tenants, landlords and owners. She possesses a distinctive insight into the industry, market knowledge and expertise,which she converts into quantifiable results for her clients regarding asset positioning, lease negotiations and investment opportunities. Her primary goal is to partner with and empower clients to make educated real estate decisions. At its essence, Chrissy believes that commercial real estate is a business about people. Her ambition has always been to be proactive, trustworthy and an active listener who provides value to her diverse clientele.
JLL Houston President Dan Bellow tapped Chrissy to establish the Houston Agency Leasing Group in 2013. As an Executive Vice President and senior member, she advised the service delivery and expansion of the business line. She has been instrumental to its success and after 6 years has seen it grow to a robust team and formidable group in the Houston market. Chrissy works closely with her clients and team to develop and execute leasing and marketing strategies customized to each owner’s short-or long-term goals for their real estate assets. Before joining JLL in 2013, Chrissy was the Managing Director of Leasing at Hines, where she oversaw a 13-million-square-foot portfolio of downtown and suburban Houston office properties, including executing the world’s largest lease for 2011, a 1.2-million-square-foot renewal for Shell Oil at One and Two Shell Plaza.

Andrew Zeplain is a Senior Associate with CBRE in Houston focusing on tenant representation on behalf of clients from a variety of industries. In this role, Mr. Zeplain focuses on lease negotiations, dispositions and restructures. Prior to his current role as a Senior Associate, Mr. Zeplain assisted with the rollout of the sales management efforts at CBRE in the Houston region. These efforts included expanding the firm’s tenant occupier practice and Global Corporate Services platform. During his career, Andrew has played an integral role in lease, sale, build-to-suit, and disposition transactions totaling over two million square feet for clients across North America, Europe and Asia.

view map Will open in a new window